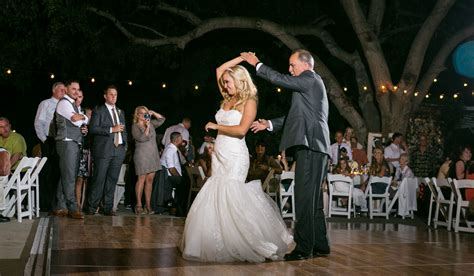 A wedding reception is full of significant moments. Between the arrival of the newlyweds and their departure, there are several components that are a part of most, if not all, traditional ceremonies. One of these elements is the opening of the dance floor, which consists of the first dance and subsequently the father/daughter dance. The father/daughter dance is one of the most emotional happenings of a wedding. Usually, more than a couple of tears are shed during this heartwarming waltz that honors the incomparable relationship between a daughter and the first man she truly loved. Thus, given its importance, a lot of thought should be given to choosing the ideal song. To make this process easier for all brides to be, I have comprised a list of what I believe to be the top 10 father/daughter songs.

1) I Loved Her First, Heartland

“I Loved Her First”, sung by American country music band Heartland, is a tear-jerking ballad sung from the point of view of a father who is struggling with giving his daughter away given that, as the title suggests, he loved her way before the man that she is about to marry did. In the song, the father admits that he always prayed she’d find the right man, but it does not make letting go of her any easier.

“And I prayed that she'd find you someday

But it's still hard to give her away

I loved her first”

Camila Cabello’s “First Man” once again emphasizes the fact that a father is the first man whom a daughter receives love and affection from. However, rather than it being sung from the point of view of a father, this song gives us the opposite perspective. These lyrics tell the story of a father who is dealing with seeing his daughter grow up and enter in a relationship with the man who she believes to be “The one.” Throughout the song, the speaker (AKA his daughter) repeatedly reassures him that she will always recognize and be thankful for the fact  that he loved her first.

“You're looking at me, while walking down the aisle

With tears in your eyes, maybe he deserves me

You don't even know how much it means to me now

That you were the first man that really loved me”

3) Half the Man, Jennifer Smestad

This song, similar to Camila Cabello’s “First Man” is also sung from the perspective of a loving daughter who greatly admires the man that her father is. In her song, Jennifer Smestad explains that the reason she has such high expectations for a partner is because her dad showed her what the “ideal” man is supposed to be like. In her eyes, no man will be as great a man as her father, but if they manage to be at least half the man that he is, she’ll still feel pretty lucky.

The song “My Little Girl” by Tim McGraw is a nostalgic ballad in which a father lovingly recalls several memories of his daughter when she was younger; the narrator goes as far back as describing the way she looked on the day she was born and mentions that he’s been wrapped around her finger ever since. Throughout the song, the point that comes across is that no matter how much she grows, or how far in the world she gets, in his eyes she will always be his little girl.

“Chase your dreams but always know

The road that will lead you home again

Go on, take on this old world but to me

You know you'll always be my little girl”

5) Dance with my Daughter, Jason Blaine

Jason Blaine’s “Dance with my Daughter” is a lighthearted song in which a father expresses his desire to make the most of the precious time he has with his daughter before she is all grown up. This sweet tune emphasizes the importance of enjoying all of the small things in life, such as sharing a simple dance with your little girl, while you still can.

“'Cause I'm just a father

Making the most of this moment in time

Before she lets me go, I'll hold her close

Caught in this race against time”

Similar to Jason Blaine’s “Dance with my Daughter” is Bob Carlisle’s “Butterfly Kisses.” In this song, Carlisle once again gives a relatively small detail, such as receiving butterfly kisses from his daughter, a lot of sentimental value. The lyrics make reference to different significant moments in his daughter's life, mentioning her sweet sixteenth and eventually her wedding day.

“Oh, with all that I've done wrong

I must have done something right

To deserve a hug every morning

And butterfly kisses at night”

7) You’ll be in My Heart, Phil Collins

The song “You’ll be in My Heart”, written and interpreted by Phil Collins, is most commonly recognized for its appearance in the 1999 Disney animated feature Tarzan. Although this song does not not explicitly mention the relationship between a father and a daughter, it describes an unbreakable bond between two individuals -which can apply to any familial tie. The lyrics are sung from the point of view of a loving narrator who promises he will always “be there”, whether it is in physical or spiritual form.

“This bond between us

I will be here

Rascal Flatts' No. 1 hit "My Wish," was written by Steve Robinson, who composed the music, and Jeffrey Steel, who wrote the lyrics using his daughter as inspiration. According to Steel, the song is meant to encourage individuals (in his case, his daughter) to dream big and to do great things with their lives. Not only that, but it is also meant to reassure said individuals of the fact that while they’re out in the world accomplishing their goals, there is always someone who will be cheering them on - even if they’re far away.

“My wish, for you, is that this life becomes all that you want it to”

The message of Rod Stewart’s Forever Young is similar to that of Rascal Flatts’ “My Wish.” In this song, the speaker goes on about what he hopes his loved one’s life will be like in the future. Along with his hopes and desires for him/her, he also offers words of wisdom intended to guide him/her in the right direction - making constant emphasis to the idea of staying “forever young”. Towards the end of the song, he assures the person on the receiving end that no matter the outcome of his/her journey, he will always be right behind them.

"Be courageous and be brave

And in my heart you'll always stay

Adele’s cover of Bob Dylan’s “Make You Feel My Love” is a beautiful, lyrical representation of what it is like to love someone unconditionally. Although this song is most commonly used amid romantic relationships, the type of love described, one without limitations, is one that also applies to the bond shared between a father and his daughter. The narrator of the song is a passionate individual who would go to the ends of the earth to prove the love that he/she has for the other person, much like any father would do for his little girl.

“I'd go hungry; I'd go black and blue

And I'd go crawling down the avenue

No, there's nothing that I wouldn't do

To make you feel my love”

While the song is definitely the most important factor to consider when it comes to the father/daughter dance, the dress does not fall far behind in significance. This is because as you dance with your father, all eyes are on you; thus, you should be certain your gown looks enchanting as you waltz around the dance floor. Poised Bridal can help you find the perfect dress. You can browse our range of beautiful designer gowns by visiting our website at www.poisedbridal.com. Or if you’d prefer, you can pop into our boutique for help! Don't forget to set up an appointment.

Every Poised Bride lives Happily Ever After.

written by Daniela A. Lopez

Website uses cookies to give you personalized shopping and marketing experiences. By continuing to use our site, you agree to our use of cookies. Learn more here.